I am fully aware that it is Tuesday but I worked yesterday and then last night was the championship game for college football so that was a focus. Good game played by both sides, unfortunately, someone always has to lose.

So I have not posted on Heaven’s Sunshine SMM in a while because there are no flowers and that us what I love to get close to. As I was heading to work yesterday I saw these tiny paw prints in the snow. They may be canine or possibly feline, regardless too cold to be out lose. 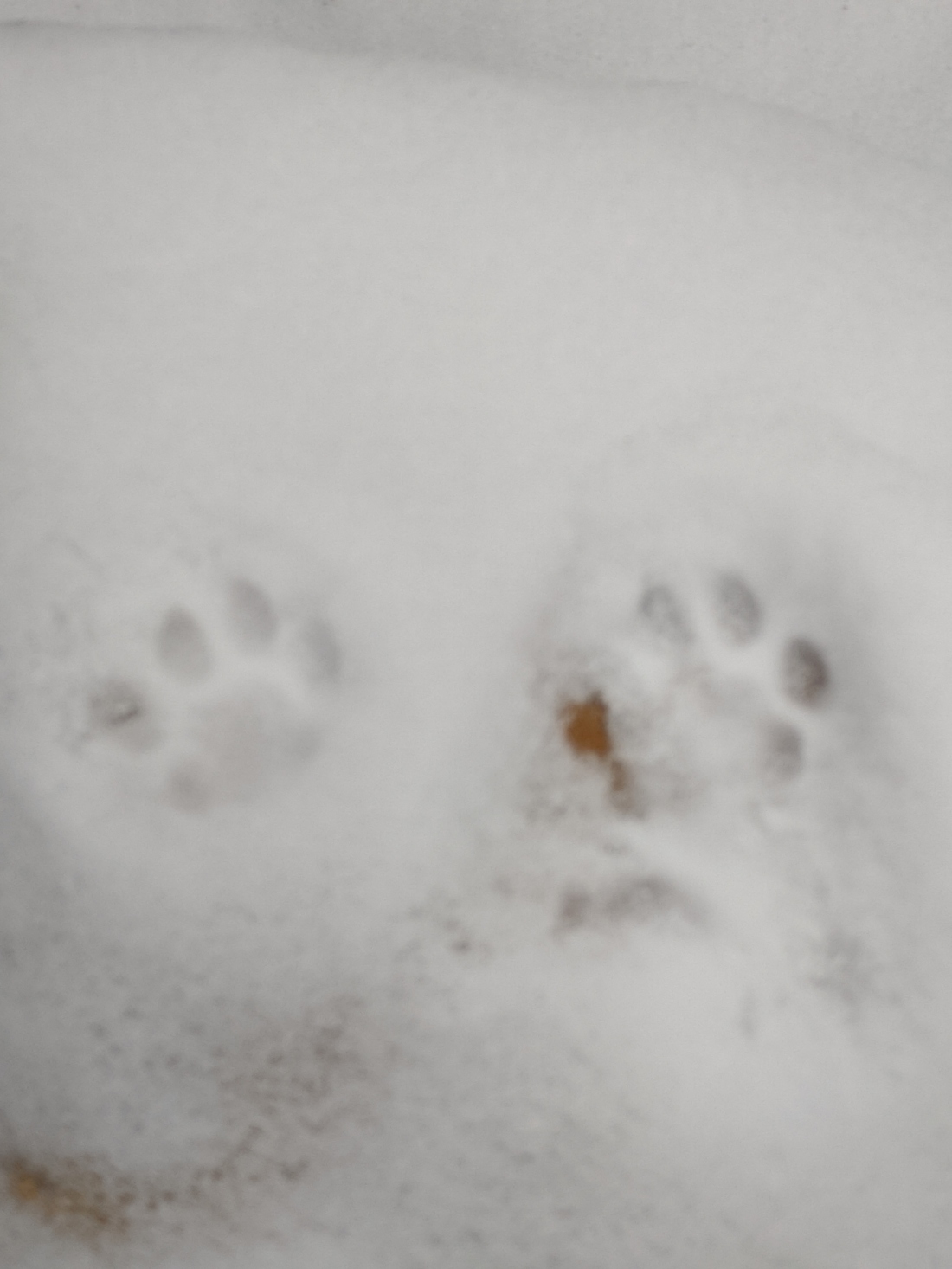 I praying its not the high pitched puppy I periodically hear crying. My ideas of how to care for a pet are totally different than some of my neighbors. My “protectors” are my 4 legged children and not to be left out in the cold.

As we are getting full into winter I pray you all stay warm and healthy, as well as your pets, and remember to always be kind to all kinds.

Every once in a while a photograph will come a cross the bloggosphere (I am sure that is not a real word, but you know what I mean) that so inspires me that I put pen to paper and write about it.  Today’s photo came from stefansphotos.se and since we are now legally in winter I felt it was good time for some winter fun…with words. Thank you Stefan for your beautiful photos. Check out his photographs at the link above. 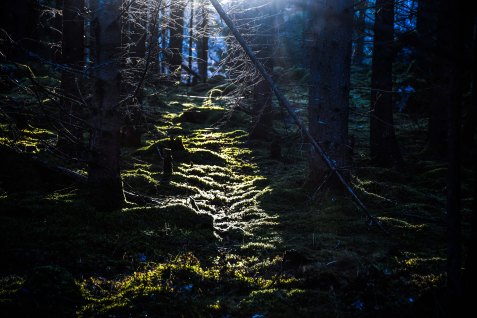 Deep in the forest where the light seldom shines

Beneath the tall branches of the evergreen pine

There lives such a creature, one hardly ever seen

The snow reflects the light of the full moon above

Shining through the night like a white mourning dove.

The winter moss is green and soft at forest floor below

As he moves along paths where no one will ever know

What lurks in those dark shadows beyond those next trees

Nothing more than old man winter playing in the night freeze

As you find yourself in the coldness of winter, remember it is easy to warm it up by being kind. Kindness can be like a blanket to wrap you up warm and snug, so let kindness come from you to cover someone like fresh new snow.

It is January which means it’s winter in the northern hemisphere which means in some areas the “S” word has arrived. We try not to say that word much here in hopes it stays away. Yea, that didn’t work for Halloween this year with 4 inches and low 20 temperatures. But I have for a picture of today’s snow, the best kind of snow – Snowed all night but due to the warmth of December, the roads were still warm and therefore the roads are still clear. So the trees were beautifully covered. The sky cleared a short while before turning back to winter gray and I was able to grab this picture.

It is amazing to me how hard wood tree twist and turn their limbs for their leaves to get the best sunshine. Even nature knows what is best for it and it tries to get there. We humans sometimes over think things and go way in the wrong direction.

As we push into this new year guiding ourselves in the direction we think is best, let us take a cue from nature and find the best direction.

And as we search for that direction, think of the beauty of fresh fallen snow, its purity and beauty and remember to cover everything with kindness. 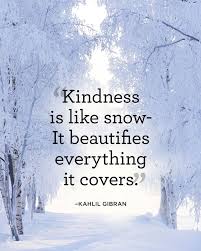 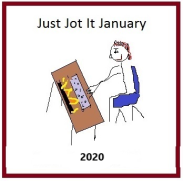 Nancy has challenged us with showing opposites. I agree that this is not my favorite tine of year and want to remember the fun warmer times of year. 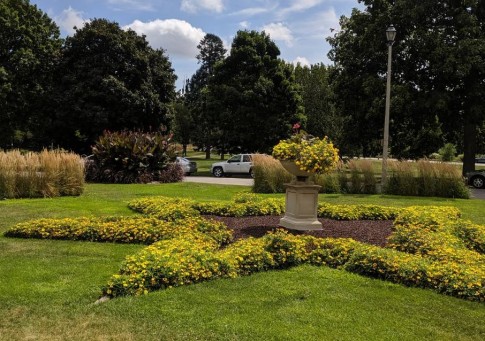 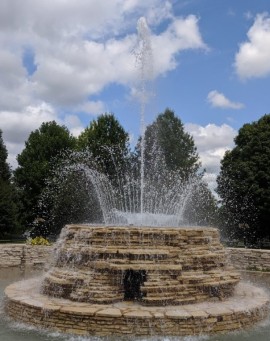 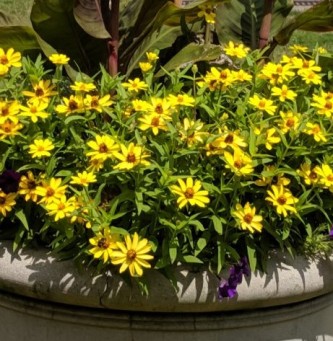 A relaxing afternoon at Vander Veer Botanical Park. Guess the plants need sleep so they can show us beauty in a few months. As you remember the warmth and the beauty of spring and summer, remember that kindness brings its own warm. So spread the warmth of kindness and watch the flowers grow.

Irene of Heaven’s Sunshine has a fun Monday post of macros which usually in my mind goes to tiny flowers and insects. Today with 3 inches of snow on the ground, I was not going to find that but I did see these on the steps going down to the garage. 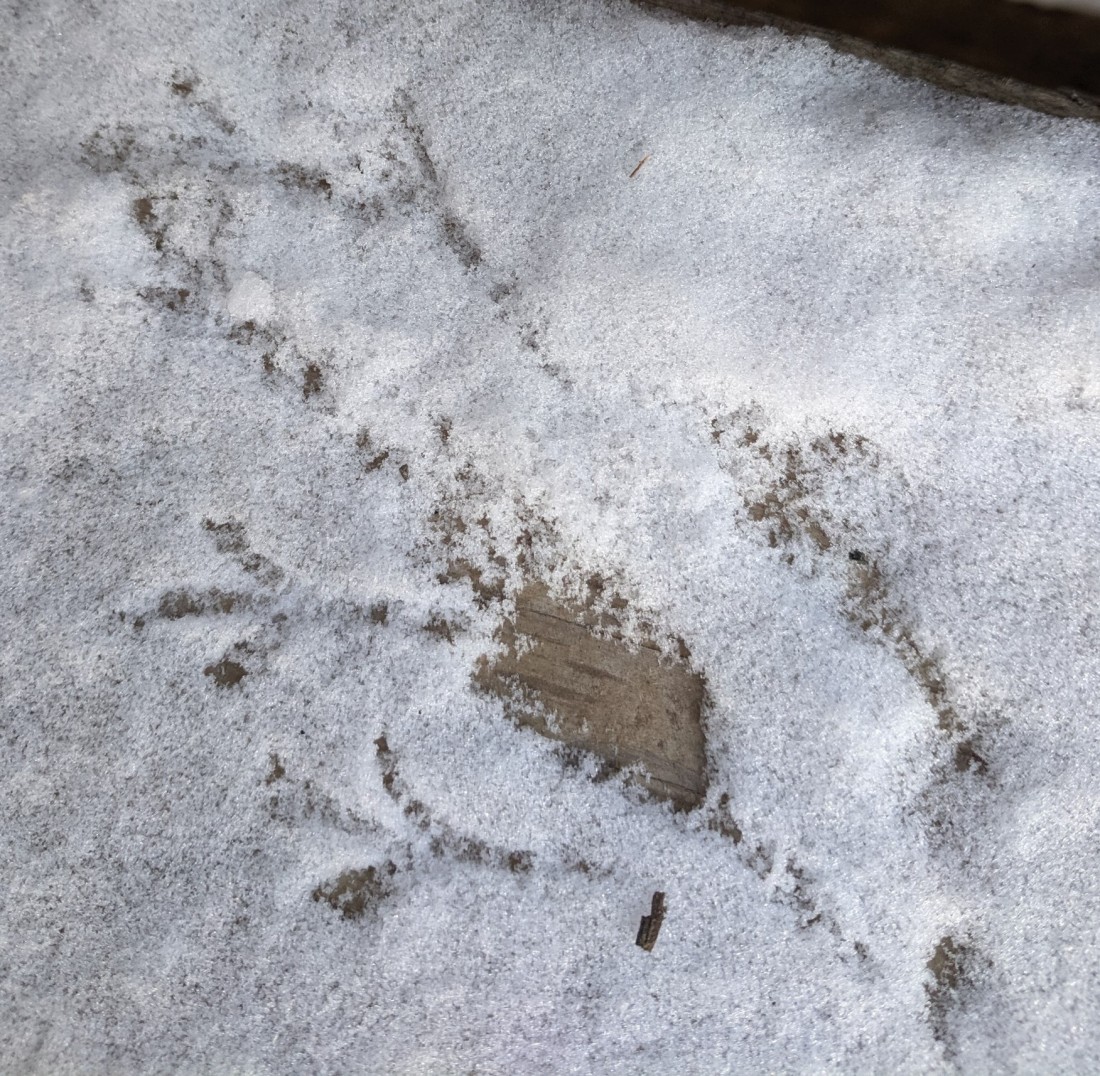 To me they stated, “We know it snowed but we are still here.” Nature has a marvelous way of survival even in hard natural disasters, which of course this is not.

But we can learn from nature in  more ways than this. We are stronger and more resilient that we realize. And as the quote says that I have seen several times… “Sometimes God calms the storms and sometimes he calms us and lets the storm rage.”

So stand strong and be kind. You may just be the hope someone else is looking for and together your are even stronger that alone.

Hi, Hello, Howdy and How in the world are you? It’s been crazy since my last post . Friday of last week…5 days ago…all due to careless incompetence. If you remember I got a new roof, yea for that. But since I have satellite TV and internet the dishes needed to be carefully removed for later re-installation once new roof was on. So what did they do…cut the wires, let them fall to the ground and throw them in the roof trash trailer. Not what they were supposed to do. The company was very apologetic and paid for the replacements and said “good help is hard to find”, really…train your people correctly and then they become good help. 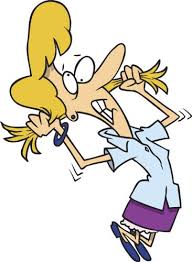 It is amazing to me the different work ethics across the country as I have now lived in 6 different states but where I am now I believe has the worse. They do great work but fall short of that last 5% to complete the job. Its amazing.

All that being said, lets do a little catching up. Technically I am still in the allowed timeline for Monday Windows as I believe it’s a weekly prompt…so I want to show another beauty from our sanctuary. It shows Jesus’ Baptism.

Monday was also the first snow for the season. It was the best kind of snow – snowed during the night, beautiful to look at, streets were still clear and it was gone by lunch. If it snowed like that all the time, I would never mind the snow. 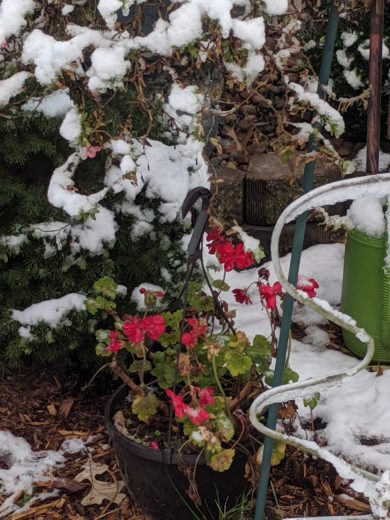 Plus it was Daisy’s first snow. It was a difficult time of keeping all 4 legs on the ground. Then we nosed a bush and the snow falls off scaring us because it moved…scary stuff. LOL.

Today’s snow is a bit different setting records of earliest snow, coldest temps…and flooding. You know its bad when you get a flood warning and a snow warning on the same day. Yes, we are still flooded – not the major flood stage of 22′ like this spring but still the Mississippi is out of its banks and has been most of the year. That is crazy to think about. Special government programs are being setup for these people whose homes have been in water in some form for 8 out of the 10 months this year thus far. I would ask that those of you who are prayers to please remember the people along the Mississippi. I learned from my youth while living in Florida that you don’t want to be too close to the water. It can be a monster of unfounded proportions.

And finally a couple of pictures of today’s snow. It will still be snowing for a couple more hours; current temp at 28 but feels like 17.

The Trunk or Treat at the church has been cancelled more for temp concerns than snow as the snow can be cleared by then but the wind coming this evening will make the temps dangerous for small ones to be out in. The malls had their trick or treat last weekend so the kids got to do some there, as well as other indoor places that celebrated. And some communities just moved it to the weekend.

I feel the “white” season is among us. With higher than normal moisture in the air, we may see more of that stuff than normal. It does warm back up into the 40’s this week so it wont last but still…

So, I leave you with warm thoughts of kindness and love. May you feel the warmth of Christ’s love as it wraps around you and remember to always share the warmth and be Kind. 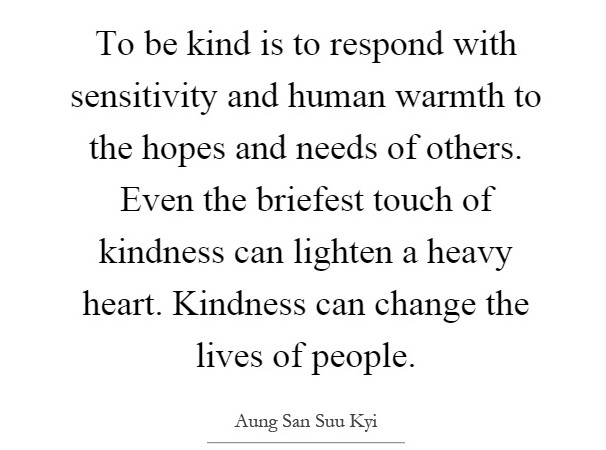 After a winter of harsh temperatures and more snow than I really wanted to see for one season, we felt the season was finally over and we could wait for the spring to slowly seep in with its warmth and beautiful flowers. Yea, wrong thought.

What, no, I had looked at the radar earlier that  day and the entire US was  mostly clear with sun.

Yep, reports said to expect an inch. Good grief. But as morning arose, it actually was about 1.5 inch but the roads were clear. OK, I can deal with that. And the more I looked at it, I really saw its beauty. It was a wet snow, so it stuck to the trees and the snow in the yards seemed really white. I understand snow is really white but with the sky bright blue and the sun rising in the sky, it just reflected whiter than what we had seen with the cold gray sky’s of winter. 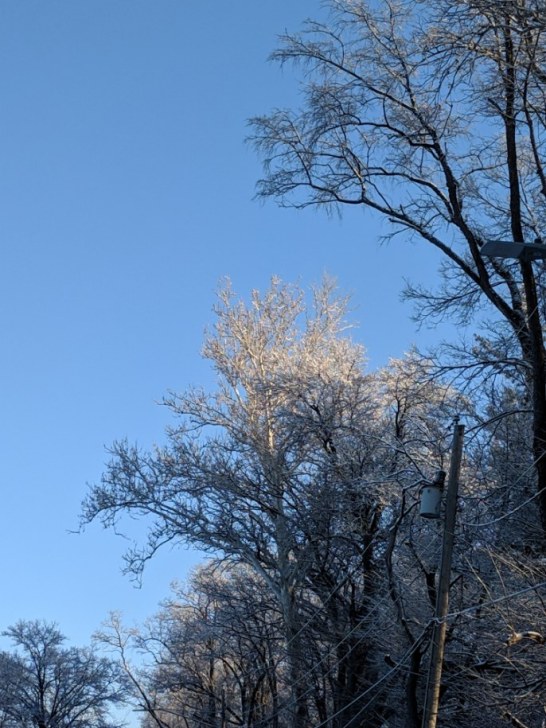 As I got in my car and headed to church the trees were even more beautiful. I took this shot from my car as I crossed over the bridge….probably not a good idea but at least I wasn’t texting.

I was reminded of the scripture verses asking for our sins to be cleaner whiter than snow. It made me feel a real connection at that moment of the closeness we can have with God.

As I moved through town the sun was at the right angle to really show case the beauty so I am enclosing a shot of the tree in the corner of the parking lot at the church. It really was amazing.

And by the time we got finished with church, it was all gone. The best kind of snow.

So I remind you of the beauty God has to offer visually, spiritually and even emotionally and remind you to share those wonderful uplifting feelings with those who have seem to lost sight of them. Share His love and always be kind.

For the Love of
Blog at WordPress.com.